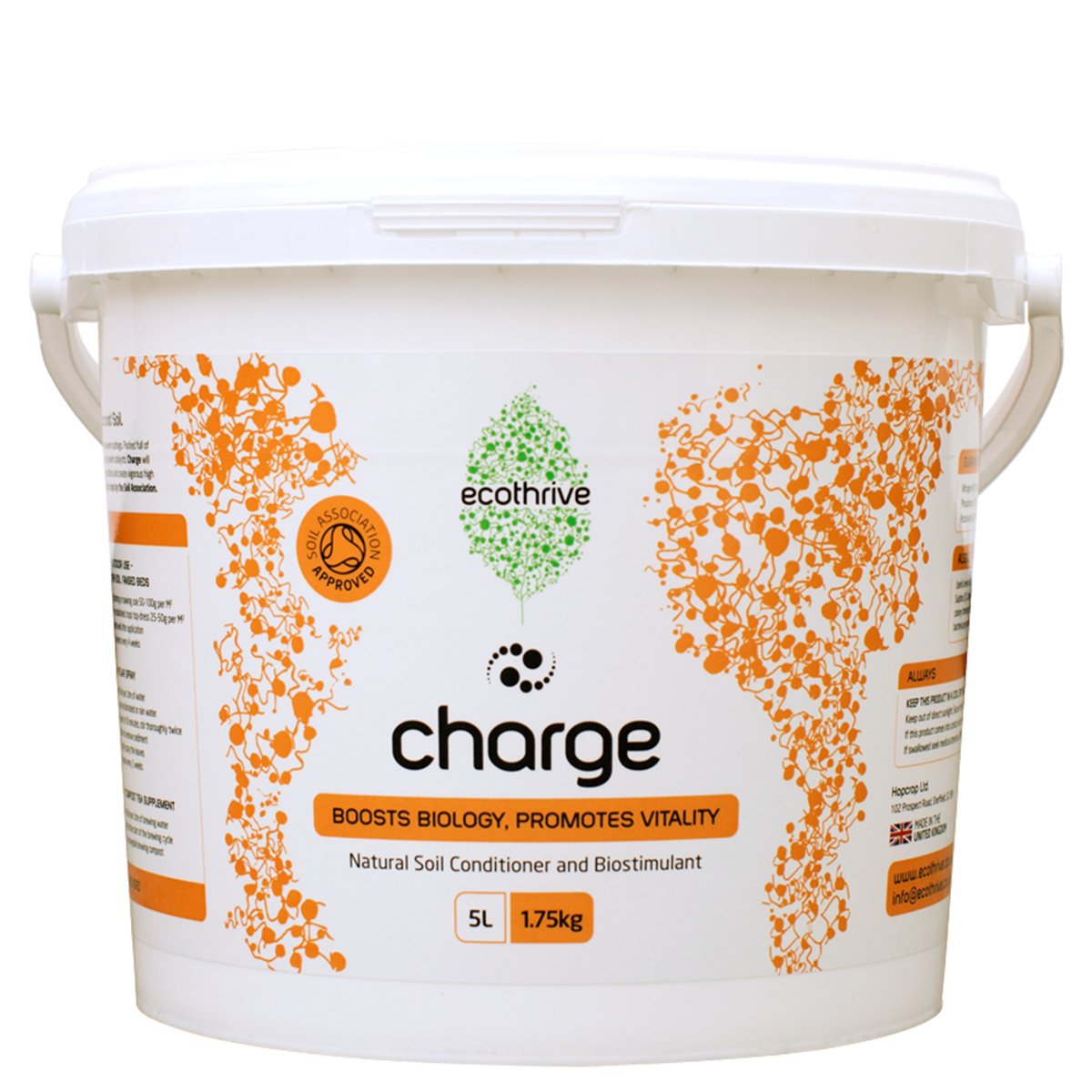 A charge is an all-natural product that comprises of 100% insect frass and a magical ingredient called chitin. Chitin stimulates plants’ natural defence systems, which in turn triggers rapid increases in growth and development. Feedback from customers has been exceptional, with gardener after gardener vowing never to grow without it again. You won’t be disappointed!

Charge is an all-natural product that comprises of 100% insect frass and a magical ingredient called chitin. Chitin stimulates plants’ natural defense systems, which in turn triggers rapid increases in growth and development. Feedback from customers has been exceptional, with gardener after gardener vowing never to grow without it again. You won’t be disappointed!

Your choice of size of Ecothrive Charge (choose your size above)

Ecothrive Charge is a natural product that’s produced from the castings of mealworms, otherwise referred to as beetle larvae excrement or ‘frass’. Though it sounds unappealing to humans, to plants this stuff is pure gold. It contains a good level of slow-release macronutrients (NPK 3:2:3) that will accelerate growth and improve overall plant vigour, as well as a magical ingredient called chitin. Chitin is commonly found in the cell walls of insects, and it triggers a kind of ‘fight or flight’ style response from plants that stimulates their natural defense systems. The frass also contains a huge amount of beneficial bacteria (450 million per gram) and several micro nutrients. The effects are, quite simply, staggering.

How to use Ecothrive Charge

Ecothrive Charge is an absolute doddle to work with – mix it with your growing medium at a rate of around 1-2% of the total volume – or 10ml – 20ml per litre. If your soil is pre-fertilised with a high level of nutrient, keep to the 1% mark to avoid over-fertilising. Charge continues to release nutrients for around 3-4 weeks.

Top Dressing
3-4 weeks after the initial treatment, you can then ‘top dress’ containers by sprinkling Charge over the substrate at a rate of 0.75g – 1.5g per litre of medium. That’s one 20ml to 40ml scoop per 10 litre container.

There are no reviews yet.

Be the first to review “Ecothrive Charge” Cancel reply

We use cookies on our website to give you the most relevant experience by remembering your preferences and repeat visits. By clicking “ACCEPT ALL”, you consent to the use of ALL the cookies. However, you may visit "Cookie Settings" to provide a controlled consent.
Cookie SettingsREJECT ALLACCEPT ALL
Manage consent

This website uses cookies to improve your experience while you navigate through the website. Out of these, the cookies that are categorized as necessary are stored on your browser as they are essential for the working of basic functionalities of the website. We also use third-party cookies that help us analyze and understand how you use this website. These cookies will be stored in your browser only with your consent. You also have the option to opt-out of these cookies. But opting out of some of these cookies may affect your browsing experience.
Necessary Always Enabled
Necessary cookies are absolutely essential for the website to function properly. These cookies ensure basic functionalities and security features of the website, anonymously.
Functional
Functional cookies help to perform certain functionalities like sharing the content of the website on social media platforms, collect feedbacks, and other third-party features.
Performance
Performance cookies are used to understand and analyze the key performance indexes of the website which helps in delivering a better user experience for the visitors.
Analytics
Analytical cookies are used to understand how visitors interact with the website. These cookies help provide information on metrics the number of visitors, bounce rate, traffic source, etc.
Advertisement
Advertisement cookies are used to provide visitors with relevant ads and marketing campaigns. These cookies track visitors across websites and collect information to provide customized ads.
Others
Other uncategorized cookies are those that are being analyzed and have not been classified into a category as yet.
SAVE & ACCEPT
X